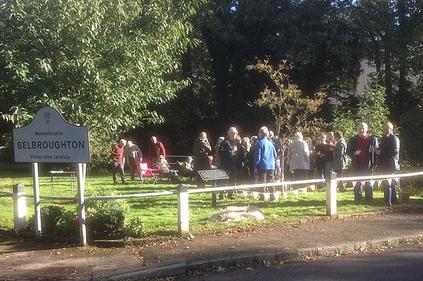 Belbroughton History Society held a jolly on 16th October to mark the installation of its latest plaque in a series that commemorates the many old mills on the Belne Brook.

This one, the last in the series, is at Middle Mill, on the Brook about 400 metres upstream from Dark Lane, or Ram Alley to use its historic name.  It is between two pools, mid-way between Hartle Lane and Ram Alley.  The physical remains of the Mill are not great, but it was very important in its day.  Having been used for corn-grinding and gun-making, the site was used in Victorian times for scythe-making, by both the Waldron family and Isaac Nash, who made a world-wide reputation for Belbroughton scythes.  Its history included being transferred under a will written by an owner in the Fleet debtors’ prison in London in the early nineteenth century, and being amongst the last to use water power, in 1945.

The site is accessible from the public footpath along the Brook, which is part of The Scythemen’s Walk.  It’s slightly awkward walking, but we hope before too long to rejuvenate the Scythemen’s Walk, including its way-marking.

The History Society has previously placed plaques at various mill-sites along the Brook, from Galton’s Lane to Drayton.  It also placed plaques on a number of the most interesting buildings in the village itself, including the Church Hall, originally an ancient tithe barn, and the old workhouse in Church Hill.  They make for an interesting tour around the village. 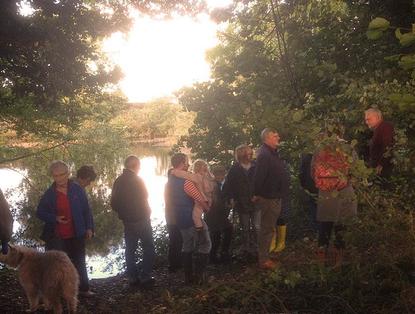